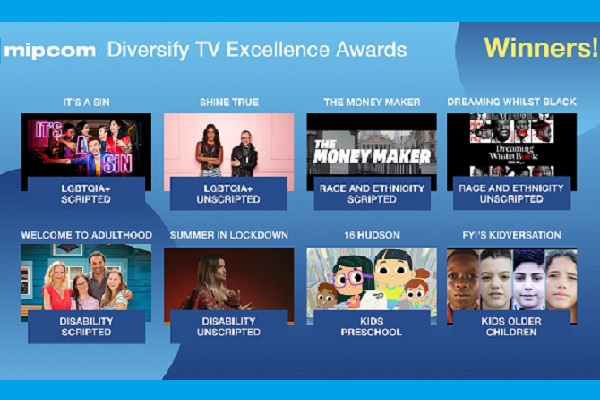 Mipcom 2021 has announced the winners of its fifth annual Diversify TV Excellence Awards, which champion and promote diversity and inclusion in all forms across the international television industry.
The awards honour international television programming that challenges stereotypes, and provides a more balanced representation of marginalised groups.
The awards ceremony was presented in association with founding partners A+E Networks and DiversifyTV, joined by presenting partners Telefilm Canada and Canada Media Fund and supported by All3Media International as partner of the disability category. Also on board this year were new supporters including the United Nations’ SDG Media Compact and Trace Studios.
Mipcom also honoured British actor Riz Ahmed for his contributions in creating inclusive stories with Variety Creative Change Award.
The winning programmes were chosen by charitable organisations that campaign for equality and inclusion, including Fondation Mozaïk, GLAAD, GADIM, Mencap, Minority Rights Group, SCOPE, Show Racism the Red Card, and Stonewall.
Russell T. Davies’ mini-series It’s a Sin, the British reality series The Money Maker, and French drama Special Honors: Welcome to Adulthood have taken top honours at the 2021 Mipcom Diversify TV Excellence Awards.
In the non-scripted categories, Shine True took the top prize for excellence in the representation of LGBTQIA+, the BBC’s Dreaming Whilst Black won for excellence in the representation of race and ethnicity, and Film 4’s Summer in Lockdown took top honours for excellence in the representation of disability.
Children’s shows were also honoured, with Canada series 16 Hudson taking the Mipcom Diversify TV Excellence Award, and FYI’s Kidversation from SkyKids taking top honours for diversity in programming for older children.
The post Mipcom announces winners of Diversify TV Excellence Awards appeared first on BroadcastPro ME.