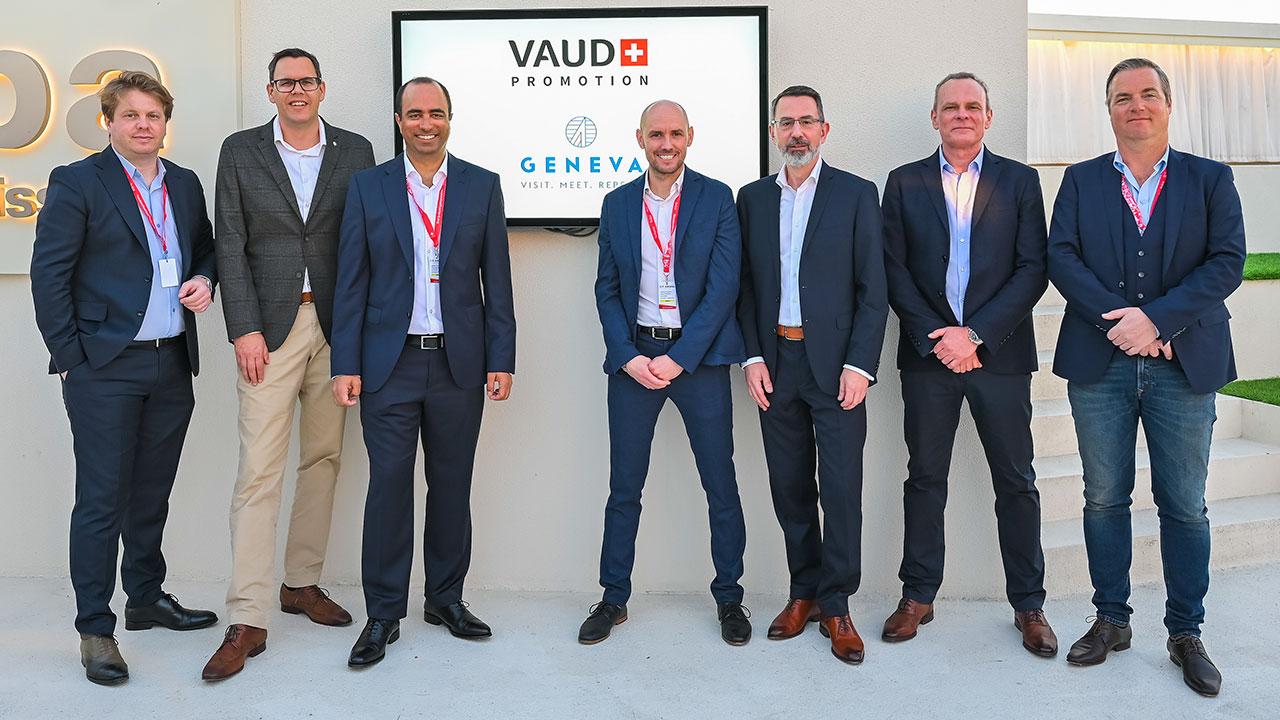 The iconic Lake Geneva Region was the centrepiece of an event to showcase the best of the region and highlighting its position as one of the most important innovation hubs in the world, whilst presenting various industries such as tourism, business, education, and science. The event, which took place on March 1 at the Switzerland Pavilion of Expo 2020 Dubai, was organised by Switzerland Tourism and Presence Switzerland and opened by H.E. Massimo Baggi, Ambassador of Switzerland to the UAE and Bahrain.

A host of Media, Tourism Professionals, VIPs, and high-profile business leaders came together for a Swiss Evening. The VIP event on the rooftop of the Switzerland Pavilion saw guests enjoy the delights of Swiss gastronomy while admiring the stunning architecture of the Expo site.

A series of informative presentations were made by Matthias Albrecht, GCC Director for Switzerland Tourism, Pierre-André Gremaud, Director of Marketing and Communications for Vaud Promotion, Christoph Sturny, Director of Montreux-Riviera Tourism, Juan Perellon, Chief Academic Officer of EHL Group, Jonathan Robin, Markets Director of Geneva Tourism and Mehdi Bensouda, Head of International Development of L’Hôpital La Tour, Genève, showcasing a region which is once again welcoming travellers from around the world without any restrictions.

The Lake Geneva Region encompasses the Canton of Vaud and Geneva in the French-speaking part of Switzerland. With its Jet d’Eau, medieval cathedrals, mystical castle, old towns, high-end watchmaking and the world’s only Olympic Museum among its attractions, there is much to do for the curious travellers. Additionally, its jaw-dropping natural landscape provides nature-lovers with a mountainous getaway, the romantic Lake Geneva, and UNESCO protected vineyard terraces

The region is also one of the most important innovation hubs in the world thanks to its density of higher education & research Institutions. It’s the leading hub for technology and innovation in life & health sciences, energy, ICT & environment, nutrition & food tech, creative industries and sustainable finance. Universities and academic institutions such as the Federal Institute of Technology Lausanne (EPFL) and the University of Geneva enjoy a highly respected reputation around the globe.

Pierre-André Gremaud from Vaud Promotion presented the area’s range of offerings from heritage and culture to its breathtaking natural beauty offering a year-round escape.

“We are so excited to be at the Expo to present the wonders of the Lake Geneva Region,” said Gremaud. “It is one of the most special parts of the country and is not only a great destination to visit with its biggest lake in Western Europe, but is also very attractive for those who wish to pursue studies, work, or even set up a business”.

“It was great to have Mr. Juan Perellon, Chief Academic Officer of EHL Group and Mr. Christoph Sturny, Director of Montreux-Riviera Tourism, with us to showcase the economically highly competitive and innovative character of the region, offering in addition exclusive experiences and quality of life” he said.

The city of Geneva was also presented by Jonathan Robin, Markets Director of Geneva Tourism, who spoke on the various industries that bring the bustling city together.

“It was great to take part in this magical event Expo 2020 and showcase how the Lake Geneva Region has always been the number one destination in Switzerland for UAE guests, due to historical links and a strong legacy. We really wanted to thank our partners for their loyalty and interest in our high-end watchmaking, wonderful nature and premium services” said Robin.

It was also a great opportunity for us to introduce Medical Tourism. The city of Geneva is home to Hôpital de La Tour, a leading medical establishment providing personalized care through a multidisciplinary approach, which was highlighted during the evening by the hospital’s Head of International Development, Mehdi Bensouda.

The event concluded with a 30-minute private show by Dubai-based comedian Ali Al Sayed, who recently performed in Switzerland as part of the Montreux Comedy Festival. The much-lauded performer treated guests to his trademark humour which has won him international acclaim.