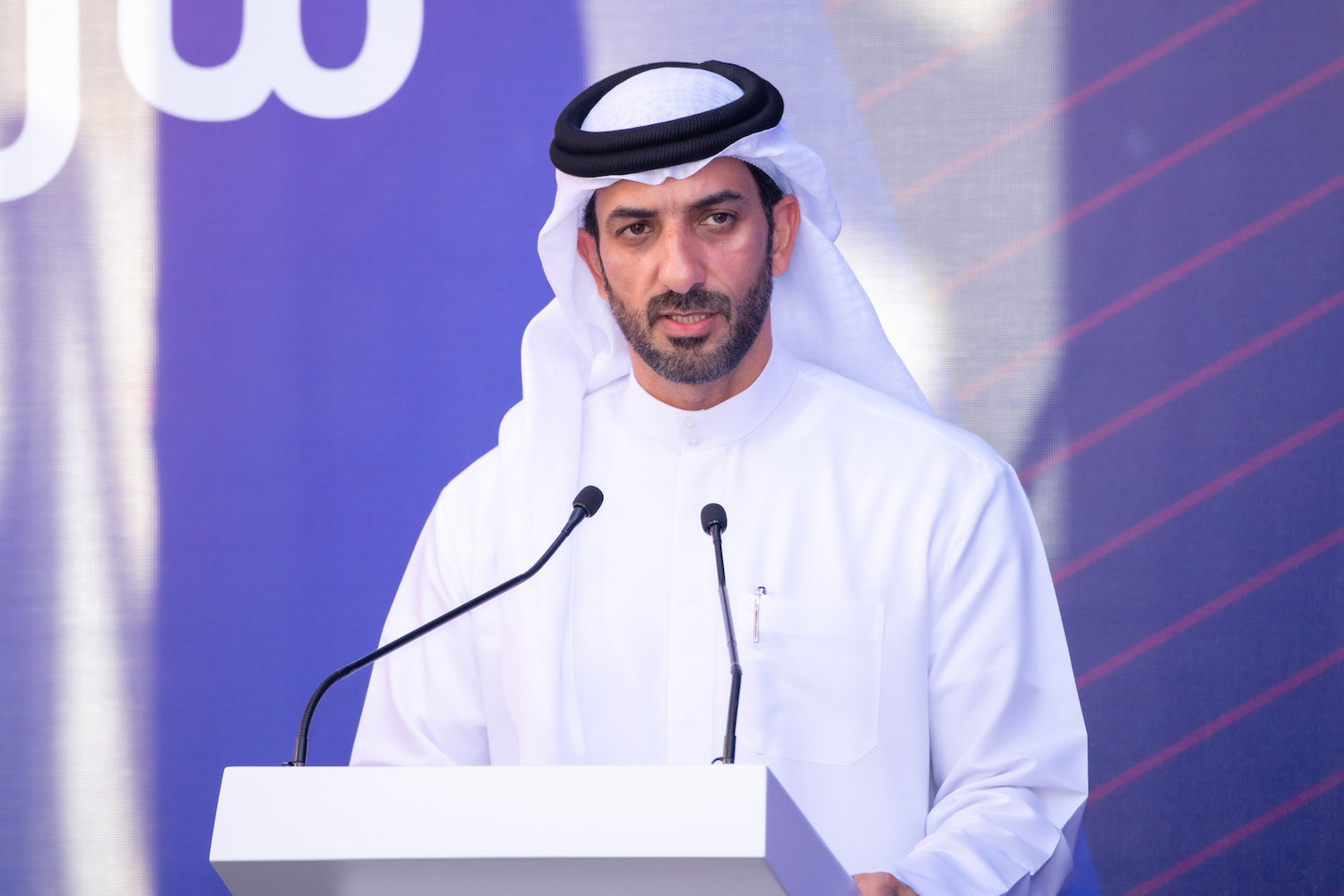 Under the patronage of His Highness Sheikh Dr Sultan bin Mohamed Al Qasimi, Supreme Council Member and Ruler of Sharjah, the ninth edition of the International Government Communication Forum (IGCF) to be held from March 4 – 5 at the Expo Centre Sharjah, will be headlined by 64 leading global thinkers, government officials and intellectuals from the Arab region and around the world.

The detailed schedule of events of the upcoming forum was revealed by the International Government Communication Centre (IGCC), a subsidiary of Sharjah Government Media Bureau (SGMB), during a press conference held at Al Majaz Amphitheatre on Wednesday (February 19) in the presence of Sheikh Sultan bin Ahmed Al Qasimi, Chairman of the Sharjah Media Council (SMC); HE Tariq Saeed Allay, Director of SGMB; Jawaher Al Naqbi, Manager of IGCC; and a host of senior officials and media representatives.

Sheikh Sultan bin Ahmed Al Qasimi: IGCF aims to improve the quality of life of individuals & societies
Addressing the press conference, Sheikh Sultan bin Ahmed Al Qasimi stressed the role of government communication in achieving good governance outcomes, saying that it has become a mirror of development that reflects the inherent values held by countries, societies and institutions, and paves the way for accomplishments in various sectors.

He added that the rapidly changing global communications landscape reinforces the need to create an enabling environment to develop and maintain effective government communication as it influences the reputation of governments and organisations in the international arena.

“Since the debut of IGCF, we have been focused on raising awareness about the role of government communication in building support for informed policy decisions and enhanced citizen engagement while also fostering accountability. Delving into the challenges to build up success, we deliberated and launched several initiatives and development programmes over the past eight years to achieve our goals,” the SMC Chairman noted.

“While our focus in the previous editions had been on the Emirate of Sharjah, our goals are now global and more expansive, and align with the vision and directives of His Highness Sheikh Dr Sultan bin Mohamed Al Qasimi, Supreme Council Member and Ruler of Sharjah, to transform the Emirate as a role model of government communication,” he added. “This is reflected in the forum’s agenda which is based on four key pillars that serve as a roadmap for communication professionals to advance their skills and is a carefully-designed way forward to build on the previous editions’ accumulated experiences and accomplishments.”

“We are conscious of the role of technology in advancing government services and performance, and we also understand that cinema, literature and arts serve as a more potent medium of communication than conventional forms of media; these reach deep into the hearts of people. IGCF’s primary aim is to enhance the quality of life of individuals and societies and every innovative activity we undertake to lead government communication to the next level must be driven towards achieving this goal,” he emphasised.

Tariq Saeed Allay: Comprehensive agenda to advance government communications
Tariq Saeed Allay, Director of SGMB, announced that the forum’s programme agenda will be based on four pillars of effective communication, which IGCC has identified to highlight during the ninth edition. These are, ‘Embedding a culture of engagement in government’, focused on opening a dialogue with the public using technologies for real-time communication and feedback. ‘Technology as a community enabler’ focuses on digital revolution, while ‘Communication through culture’ will shine light on the role of literature, art, music and sports as communication tools. The ‘Holistic wellbeing’ pillar will explore the role of effective communication in developing positive human behaviour.

Allay added that the ICGF 2020 agenda is shaped by creative content, in-depth research and analysis, and has the capacity to impact and advance government communications. These include trainings, discussions, live interactive sessions, including, ‘Job Shadowing’ programme, ‘Cinema Influencers’, Youth Forum, ‘Free Your Mind’ and Live ‘On Air’ studios, Innovation Platform, Leap of Success Platform, The Big Heart Foundation Platform, and a Sharjah World Book Capital Platform.

‘Job Shadowing’ programme and ‘Cinema Influencers’
Participants of the ‘Job Shadowing’ programme can receive training and learn on-the-job, build their capacities and prepare for their entry or advancement in the job market, while ‘Cinema Influencers’ entails a series of discussions with influencers from artistic and sports fields on social media platforms, who will talk about their role in shaping perceptions of the youth, explained Allay.

Youth Forum
The SGMB Director revealed that IGCF 2020 will organise a youth forum held in cooperation with the Arab Youth Centre, Rubu’ Qarn Foundation for Creating Leaders and Innovators and World Youth Forum will highlight the role of government communication in nurturing and supporting young generations.

‘Free Your Mind’ and Live ‘On Air’ studios
“The Live ‘On Air’ Studio, moderated by Sharjah Broadcasting Authority’s ‘Direct Line’ programme, is a live interactive session that will highlight ways to use communication tools efficiently in gauging expectations of the public. It will be open to comments from IGCF attendees on government services and communications, which will enable entities to heed and consider these comments in their development process,” Allay noted.

‘Free Your Mind’ studio will offer special training to IGCF guests to stimulate the mind and body and learn breathing techniques to de-stress.

IGCF 2020 will also have a dedicated section to showcase government communication technologies and their functionalities and potential. “In addition, two panel discussions highlighting the challenges and needs of refugees will be held at The Big Heart Foundation Platform,” said Allay.

Panel discussions and brainstorming
Ahead of the two-day forum, on March 3, IGCF will host a ‘Communications Chat’ session, which will be centred around strategies for developing effective government communication at Sheraton Sharjah. Participating in this session will be Major General Saif Al Shamsi, Commander-in-Chief of Sharjah Police; HE Marwan Jassim Al Sarkal, Executive Chairman of Sharjah Investment and Development Authority (Shurooq); HE Dr Khalid Al Midfa, Chairman of Sharjah Media City (Shams); and HE Nada Askar Al Naqbi, Director General of Sharjah Women’s Sports (SWS).

On March 4 – 5, IGCF 2020 will host a series of cross-sectional discussions on the following topics: ‘Cross-Cultural Communication’, ‘The Equation of Survival’ ,‘Media Image of Arab Societies in the West’, ‘The Detachment between the Communication Vision and its Basic Tools’, ‘New Technologies Strengthening Communication: Is There Room for Humans’, ‘Communication in the Blockchain Era’, ‘Artificial Intelligence as the New Face of Communication’, and ‘Why Does the Screen Have So Much Impact on Public Opinion?’.

Distinguished global figures will attend IGCF 2020
The high-profile two-day global summit will bring together an elite group of Arab and international speakers including Prince El Hassan bin Talal of Jordan, President and patron of the Arab Thought Forum, who will address the audience via a video session, and HE Dr. Sultan Bin Ahmad Al Jaber, Minister of State, Group CEO of the Abu Dhabi National Oil Company (ADNOC) and Chairman of the National Media Council, UAE.

Inspiring speeches
A chief highlight of IGCF 2020 are the 10 inspiring speeches from thought leaders, strategists and communication experts. The audience will hear from HE Dr Talal Abu-Ghazaleh on the topic, ‘The Story of a Mind with No Limits’, while Juan Manuel Santos will address the challenges of ‘Reputation Management: Actions Speak Louder than Words’.

Dr Michio Kaku will speak on ‘Communication: A Tool to Free the Mind’s Powers’; Charles Duhigg, a Pulitzer-prize winning American journalist and non-fiction author will speak about ‘The Power of Changing Habits’. A motivational speech by Moataz Mashal, Life and Business Strategist, international speaker and serial entrepreneur, will also be delivered at the forum.

IGCF 2020 is organised by the IGCC in partnership with a number of local and international institutions. The strategic partners of the event are Sharjah Chamber of Commerce and Industry (SCCI); Sharjah Broadcasting Authority; Sharjah Media City (Shams); Sharjah Asset Management; and Sharjah World Book Capital. Supporting partners include The Big Heart Foundation and Arab Youth Centre.